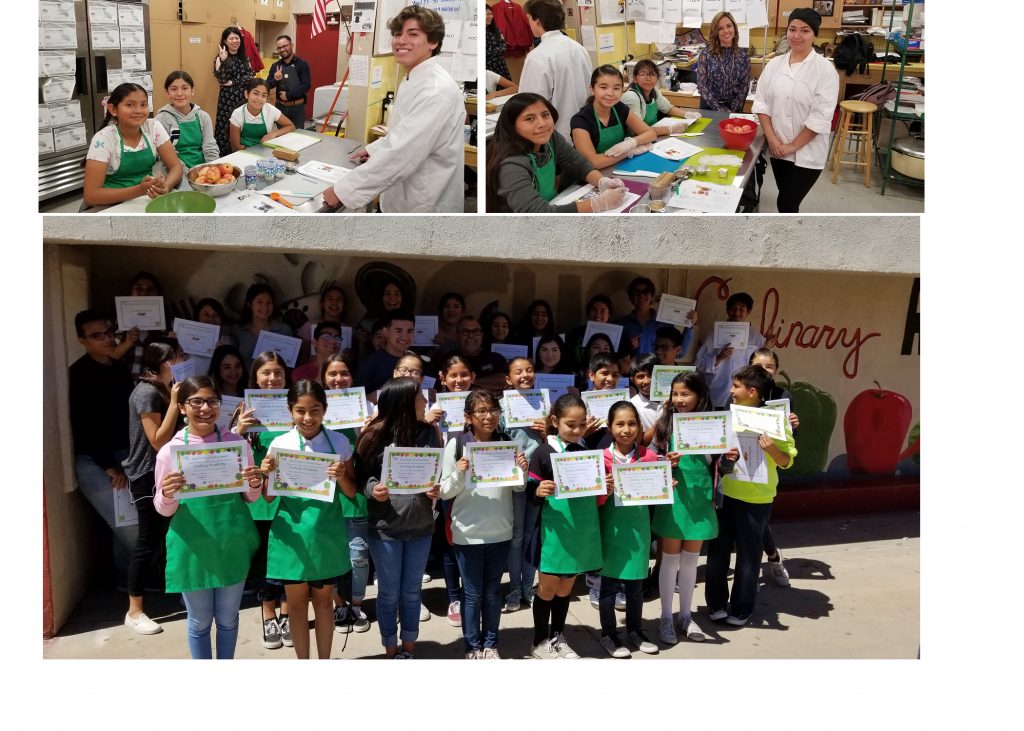 The possibility of turning her love for the culinary arts into a career didn’t come to the attention of Calexico High School senior Nelly Rodriguez until she was in high school. In her opinion, she should have gotten the notion much sooner. Through the 4-H Teens-As-Teachers Cooking Academy held Thursday, Rodriguez, along with her fellow Calexico High advanced culinary arts classmates, was able to provide Dool Elementary School students an early glimpse into the career possibilities in the kitchen.

“I think this is a really good experience for the kids because it shows them the pathways that are here at the high school that could lead them into their future,” the CHS senior said.

Inside the high school’s culinary arts classroom, CHS students worked step-by-step with the young Dool students in a two-hour session to cook French toast and make homemade syrup and toppings. Thursday marked the fourth of seven sessions in the cooking academy. This year was the first time that Calexico High hosted the academy, which came about through collaboration between UC Cal Fresh and 4-H, both of which operate through University of California Cooperative Extension. 4-H was allowed a mini-grant and purchased equipment, aprons — which were, quite appropriately, green — skillets and other materials for the Dool students, while UC Cal Fresh bought the main food ingredients. Throughout the academy, CHS students will use an evidence-based curriculum from 4-H to teach the elementary youth how to cook and prepare healthy meals for themselves.

“It’s to basically teach kids how to cook, but also just to empower them and to help them feel like they have a little more control over their food,” Chris Wong, UCCE Imperial County Community Education Specialist II, said. “At the same time,it serves purpose to the high school culinary class because it professionally develops them for their food demos and their competitions at the end of the year.”

The introduction of the 4-H academy locally served as an important step forward for Imperial County, as other counties around the state have already implemented the 4-H academy. “Hopefully we can start a new tradition where this can happen… with all the elementary schools as well,” Wong said. “If the schools can’t come to Calexico High School, we’d like to send the culinary arts students to the individual schools and classrooms so they can then do nutrition classes and food demo presentations in the classrooms.”

Samuel Gutierrez, a counselor at Dool Elementary who chaperons the students each session, explained how the academy has helped one student, in particular, this school year. “He recently came from Mexicali,” Gutierrez said. “Did not know any English, no friends, new country, new system and new everything. He would cry every single day coming to school. He did not want to be here because he missed mom, and he didn’t want to make friends. It was a very difficult transition for him.”

After getting to learn more about the student, Gutierrez discovered the student had an interest in cooking.

“I told him, ‘Y’know, you can study this for a career,’ Gutierrez said. “‘You do me a favor: You come to school tomorrow, and I’ll take you to the program.’ I called the mom, the dad and got on the same page as them, and surely enough, the student came to school and we brought the student here. He got the opportunity to engage in this course, with other students, communicate with other students, to socialize with them.”

The counselor noticed the student began to gain a sense of belonging. “He made friends… and (he’s) learning culinary arts as a career venue. He’s learning life skills that he could practice at home with his family. And guess what, his attendance went up because now there’s a reason for him to come to school. There’s a reason why he needs to do good in math… [and] in English. He was a newcomer, did not speak any English. If you go up to him right now, and you talk to him, he’ll speak to you in English. These are the kind of results that we see when we provide opportunity for our students by speaking life and future to them.”

Working with a group of Dool students a few tables down from Rodriguez was CHS senior Julio Ramirez.

“Now that we’re in our fourth session, they’re more comfortable with us,” Rodriguez said. “The first day, they were sort of nervous, not wanting to do stuff. Now since it’s they’re fourth time, they’re anxious to do it. It’s just a good thing to see.”

To wrap up Thursday’s session, Calexico High students showed the young chefs the technique of plating and having their food ready for presentation. Chef Nunez walked around room to each table and gave feedback to each Dool student on their creations. “Since this is just a project, we don’t grade anything,” Nunez said. “It’s just the look on these elementary kids’ faces when they’re eating their final project. To me, that’s an A plus.”

Share our Community of Practice with your colleagues. Complete this Google Form to join the group.

Powered by the Extension Foundation